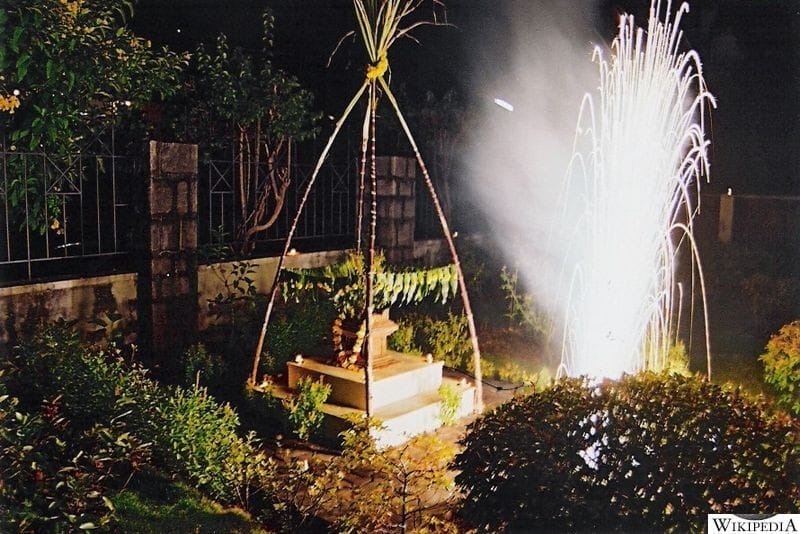 The invite made me wonder. It was an erstwhile neighbour’s fourth wedding. Sheer misfortune had seen him lose his first two wives in a period of ten years, one after another. He was now trying his luck at matrimony, again. But, when did the third marriage happen? His second wife had passed away just a year ago.

I attended the ceremony and voiced my doubts discreetly to an acquaintance. “When did he marry the third time?” “He now will,” she said and I stared, a bit confused. The fourth bride was waiting patiently.

I did not know what to make of it till the third ‘bride’ was brought in. ‘She’ was a tulsi [holy basil, or Ocimum sanctum] plant. The man was to be married to the plant to ensure that the ‘curse’ of the death of a partner would end with the plant. Any blight, it was believed, would manifest itself three times. The plant was, then, the third bride who would, indirectly, keep the fourth wife safe.

How will he divorce ‘her?’ I wondered. ‘She,’ meaning the plant, would be made to course down a river, I was told.

The symbolic significance of trees and vegetation in religious life, including the framework of the sacred, has been common to every civilisation. It has been used in all possible forms, be it cosmology, mythology, theology, ritual, iconography, or folklore. From Vedic rituals to Mesopotamian beliefs, trees, plants and vegetation have played a distinctive role in the human psyche.

It is believed that our vegetation cult is a by-product of religious values and ceremonies of agriculture of erstwhile societies. Yet, within this cult there are innumerable ways of looking at it. A plant could be seen as the sacred tree-altar, tree of life, centre of the world,  the Universe, the inverted tree, a symbol of regeneration, immortality, magic, house deities and demons, not to speak of the mysterious bond between tree and also man in the form of marriage — aside from human ‘birth’ from the trees. There are others too, infinitely fascinating and wide in their spectrum, as the topic itself, but the episode of the tree-bride, in this case, brought into focus the penultimate connotation cited.

The tulsi plant is the most ‘married’ in India. It can marry men as also other plants. In certain Indian communities, tulsi is married to a stalk of sugarcane, just after Deepavali [Festival of Lights]. Tulsi is the delicate bride; sugarcane, the stocky groom. Tulsi is also considered a consort of Lord Vishnu.

A man is also married to a tulsi plant, if his real bride has been widowed earlier. This marriage to tulsi is considered the ‘real’ one.

In the coastal regions of our country, there’s an ancient ritual in some communities — offering cradles to trees. It was believed that, several centuries ago, a danger of extinction of the community saw members appeal to the Tree Goddess to help them have healthy progeny. It was also said that the Tree Goddess granted them the wish after which, every few years, not only did the communities offer a cradle to the tree, they also left their villages, family and cattle in tow. They lived outside the village for three days as a mark of respect, and reverence — offering ‘empty space’ to the Goddess for Her to go about doing Her work of blessing every home.

The Santhals and Kharia tribes in India have their clans named after plants. They show reverence to a particular plant, do not eat its fruits, or pluck its flowers. The dead plants are given a final farewell in full honour.

A section of the Kemu folks of the rainforests scattered in Laos and Vietnam never cut ficus trees that are considered as their ‘ancestral’ plants and also worshipped as totems. The Miao tribes of Central China were known to worship bamboo as their ancestor. So do the aborigines of Formosa, the Tagalogs of the Philippines, and the Ya-Lang in Japan.

The French anthropologist Arnold Van Gennep describes a tribe called Antaivandrika, which means ‘People of the Tree Vandrika.’ They consider themselves direct descendents of the banana tree. He also describes certain aboriginal tribes in Australia who once believed that the first man was a child of Mimosa.

Our ancient societies seemed to believe that plants contain the force of life and that humans are potential seeds. In their book, Northern Tribes of Central Australia, anthropological researchers and authors F J Gillen and Walter Baldwin Spencer describe how the Warramunga tribes of northern Australia believed that trees contained spirits of children within them and entered the wombs of mothers through the navel. This means not only did the first man of the tribe descend from the tree, but so did every child.

Plants have the ultimate powers to create too. In China, it was once thought that childless women should adopt children to make flowers grow on a particular tree so that they, in turn, would be fertile. In fact, one would have as many children as the tree had flowers.

The Santhali folklore, which also finds its echo elsewhere in the world, talks of people turning into plants. Invariably, it is a young woman, wronged by her own people, or circumstances, who has to lose her life when turned into a plant. She is subsequently rescued by a handsome prince. The plants vary from a rose, bamboo, or mango, to a lemon tree. In some primaeval societies, a tree was planted with the birth of a child, or the placenta buried at the ‘foot’ of a tree in the courtyard.

Trees and humans have always shared life. A beautiful example of this divine ‘bond’ is found in the Buddhist scriptures — especially in the description of the life of Shakyamuni. Shakyamuni was always said to reside close to plants in critical moments of His life: He was, in fact, born under the ‘Sorrowless Tree.’ He became the Buddha under the sacred fig trees; and, He died under the Sal tree.

Not surprisingly, this old mystical alliance, or ‘fusion’ of plants and human beings, continues even in the 21st century. You’d sure reflect on it the next time you come across an ‘oak’ of a person, or a shrinking violet.