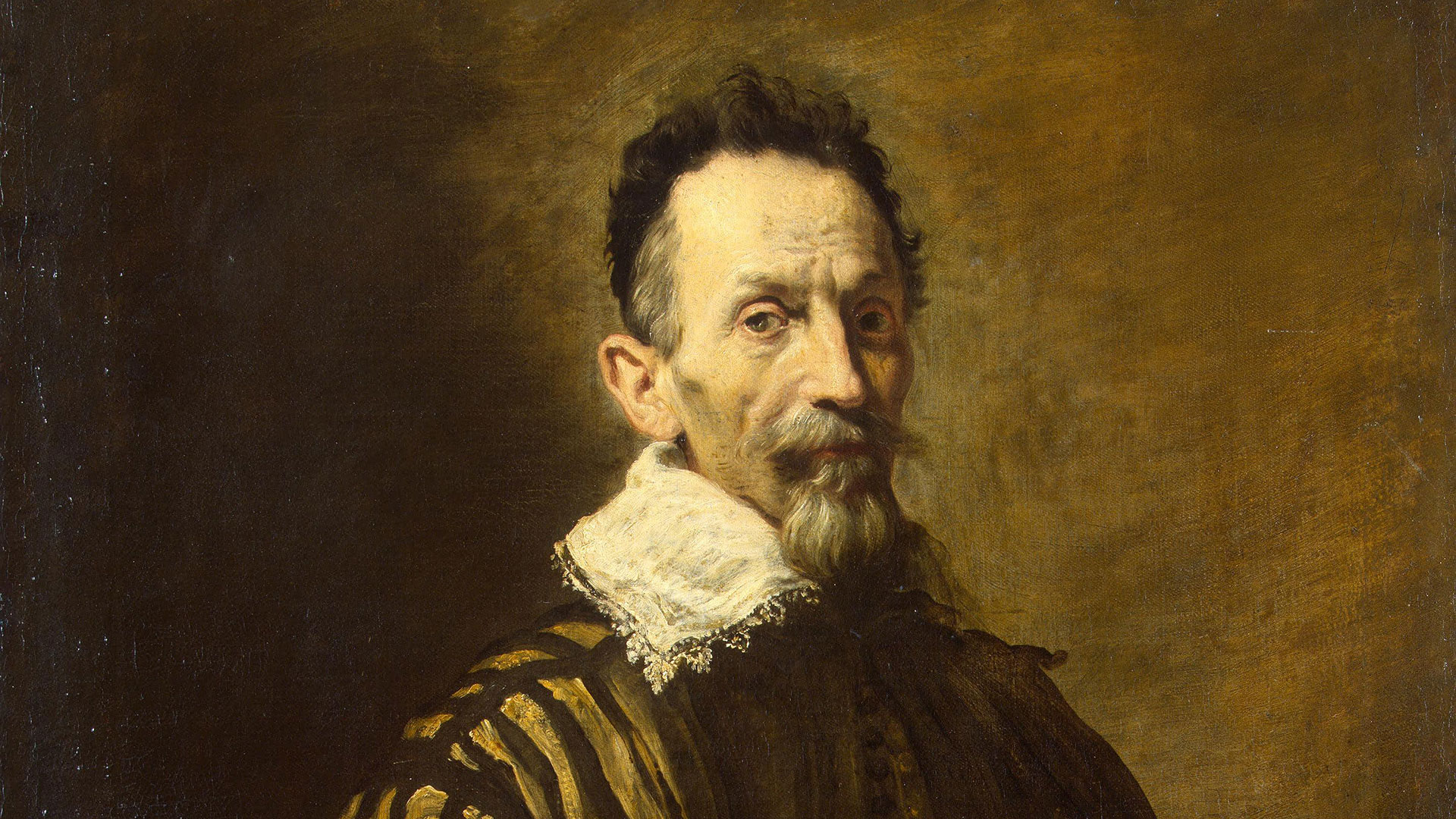 Claudio Monteverdi was one of music’s greatest composers. He was his own symphony, and magnum opus. A martinet classicist, Monteverdi, quite simply, never ever compromised on what he thought was exact — be it a note, or a theme. He is fondly remembered, today, as the primal composer of L’Orfeo, albeit his most famous composition — one that has been etched in letters of gold, on the sands of time — remains his incomparable opera, L’Arianna.

When Monteverdi’s first opera, L’Orfeo, was performed in 1627, before an aristocratic academy, at Mantua, it marked a new beginning in his career. Because, until then, Monteverdi was in the services of the royal court of Gonzagas — as an instrumentalist. It was not the best of times, because, for eighteen years, till his magical revelation emerged, Monteverdi had reason to feel that his awesome talent was undervalued. He felt the court was loaded in favour of poets, such as Tasso and Guarani, and painters like Rubens — notwithstanding rich resources in other talents.

The feeling just stayed on, all the same, until Monteverdi bid adieu, and journeyed for the greener, richer, pastures of Venice. Venice was what the doctor had ordered, and Monteverdi was soon in his element. Within a short period of time, he published two shorter versions of L’Orfeo — a remarkable foray that calls for a large ensemble of wind, strings, and brass allied to a varied group of continuo instruments. This, more or less, explains why L’Orfeo would be listless without virtuoso performers.

L’Orfeo is so much, and more, like ‘Mass’ and ‘Vespers,’ with its resplendent introduction addressed to the Pope. It is a rendition beyond approximation — something that was designed by the Gods of Music to demonstrate Monteverdi’s supreme finesse, and fluency, in a wide repertoire of styles, both old and new. However this maybe, Monteverdi himself was drawn, both psychically and spiritually, into that famous lament sung by Arianna, on being abandoned by Theseus on Naxos — a five-voice madrigal, in essence. There was an element of anachronism, even ambivalence, with Monteverdi’s L’Arianna. It mirrored the composer’s artistic and emotional life — as it were.

Monteverdi comprehended that L’Arianna was a natural way of imitation of bewail — a musico-dramatic language in which words and forms were intimately bound, for sense, sound and music to fuse. It was also a constant reminder to the great composer of an upheaval, a traumatic period. It bespoke death — maybe, ‘prophecy.’ Before long, following the success of L’Orfeo, and with L’Arianna making waves, Monteverdi’s beloved wife, Claudia, became seriously ill, and was no more. And, no sooner had this personal desolation shaken Monteverdi’s entire being, Mantua required him to take part in a musical extravaganza for a royal wedding. With L’Arianna. Nothing else.

That’s not all. There was yet another setback waiting. Monteverdi’s title singer, Caterina Martinelli — a young, accomplished, lively, and experienced artiste — contracted smallpox, and died almost immediately. It was a professional and personal blow for Monteverdi. He was in a fix. But, his Creator did not let him down. A visiting theatrical singer, Virginia Andreini, learned the title role, and did a successful job when it was most needed. Monteverdi heaved a sigh of relief.

Venice was to Monteverdi what football was to ‘King’ Pele. He flourished as never before, in spite of personal tragedies. It was Venice that first broadened and refined his dramatic language, and eventually led him to formulate his last two great operas — The Return of Ulysses, and The Coronation of Poppea. The cosmopolitan milieu of the great conurbation of canals, its musical reservoir, and books, not to speak of some eminent, distinguished colleagues — and, most importantly, his pupils, acted as a tonic and inspirational opportunity for Monteverdi. The rest, as the cliché goes, is history.

As a composer, Monteverdi endeavoured to create a practical philosophy of music, and stylistic innovations. He followed Platonian ideals, and divided emotion into three basic categories: love, war, and calmness. He expressed each kind by differing rhythms and harmonies. His theory of music was an unbridled acceptance of realism — the imitation of nature in myriad ways. This was precisely the reason why he placed great emphasis on the innate meaning of the text through [his] music.

Monteverdi’s music had lightness, a sense of humour — something that carried with it an aura, or quintessence, of a poem rather than its detail. Take for instance, his cantata: the use of pizzicato, or plucking strings, to express the clashing of swords. It’s a wondrous paradigm that not only demonstrates his originality, but also his consummate skill for the idiomatic use of stringed instruments. Not only that. Monteverdi’s work emphasises drama, with a sense of a grand climax: where music was/is a means rather than an end. Of memorable melodies made to gel into a musically attractive woven pattern for the opera. This was his stamp. Peerless. Beyond compare — a touchstone of his very own creativity, and pedestal for his exalted place in Music’s Hall of Fame.

Son of a barber-surgeon and chemist, Monteverdi [May 15, 1567-November 29, 1643] was also one of the greatest Italian musical-dramatists of all time. In his formative years, he studied with the director of music at a cathedral: Marc’Antonio Ingegneri. A prodigy, Monteverdi also published several books — on both religious and secular music — in his teens. They were all competent pieces, not only excellent in terms of classical allegory, but also attractive in word and sound. Destiny was manifest — and, Monteverdi was marked for greatness with more than a touch of Plato’s ‘divine frenzy,’ and from the word go.

Monteverdi was equally fond of chromaticism, especially in his madrigals. He also used sighing suspensions, and unexpected leaps to hold on to bass pedal notes to create chords. His repetition structures were also unique. He often created large-scale pieces by bringing back the same blocks of material, and varied their meter to give more variety. It was his benchmark — and, quite unlike his contemporaries. When Monteverdi died, at age 76, he was cognisant of his contribution to music — a grand legacy to which he never attached a price-tag.

Monteverdi contended that good music was in consonance with the rhythm of life: a metaphor, a potion of fascinatingly structured, yet precisely composed form of therapy. He also believed that music was a renewal of divine balance, synchronisation of human mind, and its emotions. He regarded many forms of sickness as being, more or less, musical problems. A sick person, he reckoned, had lost their inner strength, harmony. Their sickness was a dissonance, a disturbed symphony, not in tune with the laws of the cosmos. This explains why he used music to bring about man’s rapprochement, even realignment, with cosmic or universal sound.

If the ancients placed wholesome faith in the healing powers of music, Monteverdi was an ardent proponent of the idea of [mediaeval] minstrels playing music for patients in convalescence, thus fostering their recovery. Touché! Modern scientific thought confirms that music, Eastern or Western — one that is quite soft, and gentle — has a soothing, tranquillising effect on patients, more so in individuals that are anxious, tense, or highly strung. It is a universal curative agent, which has now been found to be efficacious, in conjunction with, or outside, medical treatment, for a host of illnesses: from anxiety, asthma, TB, cancer, hypertension, headaches, insomnia, depression, to Parkinson’s disease, not to speak of bed-wetting in children. Music can also fine-tune the mind for a host of other activities: from academic learning to sports. Not only that. Music is more than a boon to the handicapped. Musical instruments, with adaptations, can effectively be used for the development of sensory-motor co-ordination — something that could help the disabled to move.

LANGUAGE OF THE SOUL

Music, said Monteverdi, is the language of the soul — a complete reorganisation of the self. To cull one example. Hippocrates, the ‘father of medicine,’ often took his mental patients to the Temple of Aesculapius, with a singular purpose: to heal them, by making them listen to the harmony of sounds. Antiquity has it that music has something more to it than the healing power of herbs — to cure illness. To draw another example: Homer relates, in both the Iliad and the Odyssey, how sacred hymns and songs halted a rummaging plague, and the ‘chanting of lays’ healed Ulysses’ injured knee. No small wonder why Monteverdi conjured up visions of his timeless maxim: ‘The end of all good music is to affect the soul.’

Aside from all his palpable genius, there’s more to Monteverdi than what meets the ear. His public style was supremely resonant. He created musical pomp and splendour with shimmering brass, ceremonial dotted rhythms, and spezzati effects. What’s more, his monodic lines were often more flexible. It’s ditto for his own idea of basso continuo: a masterstroke. His introduction of the ‘manoeuvre’ changed the polarity of his bass and upper line. The outcome was dramatic. It freed the upper voice, and evolved the basis of his stamp, or leitmotiv. And, although Monteverdi’s madrigalism is now no longer in vogue, his great range of textual nuance, or drama, created through a fluid melodic style, has parallels in modern opera — a living embodiment, and a veritable accolade to his genius.

It sums up Monteverdi — the first great composer of opera. A man, who revealed the magnificent possibilities of music, never before incarnate — for yesterday, today, and tomorrow.

← The Good Fat The Butterfly Effect →