The Love Of Coffee

I remember the very first cup of Starbucks coffee I had. At Trondheim’s Værnes airport with my wife Varshita. This was sometime in 2010. This is a store under the aegis of Starbucks International formed in 1994, a few years after Starbucks Corporation was established by the takeover of Starbucks Coffee Company by Howard Schultz’s Il Giornale.

DREAMER TO ENTREPRENEUR. MANAGER TO LEADER

‘If you pour your heart out into any enterprise, you can achieve dreams which others think impossible.’

In Pour Your Heart Into It, Schultz has charted his journey with Starbucks, one which is almost set in stone in the business world, though not perfectly analogous to the four ashramas of Hinduism — brahmacharya, grihasta, vanaprastha, sannyasa. Dreams are seeds sown at a young age; and, the saplings which sprout need to be tended to like a parent would care for their child.

Schultz went through a challenging childhood and testing teenage years, watching his father struggle in his career — that sparked a desire in him to start something which would enable him to leave no one behind, and repaint capitalism as ‘opportunity for all’ and not ‘oppression of the lower strata’ — a ‘fount of optimism and collaborative growth’ and not ‘competitive dog-eat-dog business’.

He admits that a fear of failure was a driving factor for some time in his career. Starbucks Corporation [and, Starbucks International, by extension] has been guided by such visions, over the years, just as it has been sustained by a combination of discipline and innovation, process and creativity, caution and boldness. Schultz challenges readers to dare follow their dreams, and not be pressurised by peers and friends to play it safe, for then, he says, you would never be able to break new ground and set new trends. Pour Your Heart Into It is a must-read for coffee-lovers as well as business managers and, more so, for students of management and business administration. It has more to offer than the standard textbooks which are part of the syllabi.

NO CRISIS BIG ENOUGH FOR THE DAUNTLESS

An indispensable quality in an entrepreneur and visionary is the ability to spot the silver linings in clouds that invariably loom large during the lifetime of an enterprise. Great successes and wonderful legacies are almost often the product of taking risks, surmounting the toughest of odds, and the most excruciating of challenges — demonstrating ‘courage under fire’. Bad luck, the author says, comes out of the blue, but good luck can be created by planning well and learning from mistakes. It takes longer for some, no doubt, but as Schultz says, those who never rest on their laurels and keep on keeping on, even after others have stopped to rest and recover, are favoured by the universe in the end.

The history of Starbucks is replete with challenges, big and small, which Schultz and his team of like-minded partners faced, always with an eye on the prize. ‘No enterprise can be built, no dream achieved, without confronting challenges, disappointments and surprises along the way,’ writes Schultz.

When you sit and sip your Cappuccino or Americano or Latte, in the company of your family, friend, or colleague, in a cosy, inviting and enriching ambience, pray think about the long journey, on which the café you are seated in, is one milestone.

IT’S NOT ABOUT ‘COUNTING BEANS’ 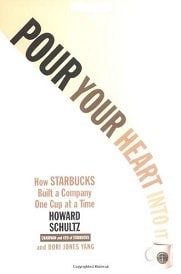 Lowering costs without compromising on quality — now is that even possible, one may ask. Yes, if one wishes to. However, it is surely not something which every Tom, Dick and Harry can pull off. That is why when it happens, the people behind it need to be appreciated, lauded and respected; more for how they achieved what they did, rather than what they achieved. ‘More from less’ — the cornerstone of sustainability, which is a sine qua non for this century — has been advocated by Schultz, as a golden mantra for success. ‘More from less’ also entails under-promising and over-delivering which wise leaders do, and this is what separates them from the voluble pack which fails to walk the talk and spends time on inventing excuses.

Schultz delves insightfully into the four stages of coffee-making — growing [earth], roasting [fire], brewing [water] and the aroma [air]. While Starbucks has been inspired by this quartet in designing its store-interiors, it also, as part of its corporate social and environmental responsibilities, has been taking steps to understand the social and ecological footprints of the coffee beans and drinks that it sells, identify the hotspots and minimise the externalities that would, otherwise, have gone unnoticed along the value chain. The author elaborates Starbucks’ association with the NGO CARE which is active in almost all the coffee-growing countries from which Starbucks sources its coffee beans.

Coffee is a beverage which owes its discovery to a goat in Ethiopia. Goats symbolise uphill climbs. ‘Everything we try to achieve is like climbing a steep slope. The more difficult the climb, the more gratifying the effort and greater the satisfaction on having reached the top,’ writes Schultz. This is a climb, which a highest-quality-Arabica-whole-bean-to-coffee-by-the-cup-to-coffee-extract-based-products multinational like Starbucks has accomplished with success. By simply refusing to rest on its laurels. By resolving to not compromise on quality. By heeding to customers’ and employees’ feedback. By valuing employees as ‘partners’ even when this was considered as uncompetitive and paternalistic. By shedding dogma and embracing diversity. By daring to choose paths less-travelled when presented with a ‘fork in the road.’ By instilling a robust change culture and gradually elevating itself from a good local brand to a great national brand and aspiring to becoming the G.O.A.T. Starbucks is a largely people-driven, product-driven, values-driven enterprise; it is not marketing-driven. This has always been its keyword; a norm, no less. A big chain with a soul, winning hearts: ‘one customer at a time, one store at a time, one market at a time.’

If one thinks of Starbucks as a metaphor for life, this is a book that celebrates its applied beans’ philosophy — in word and deed.

Pour Your Heart Into It: How Starbucks Built a Company One Cup at a Time
Howard Schultz
Hachette Books
pp: 368
Price ₹606.00

← To Vent Or Not To A-Bomb: How US Changed The Course Of History →