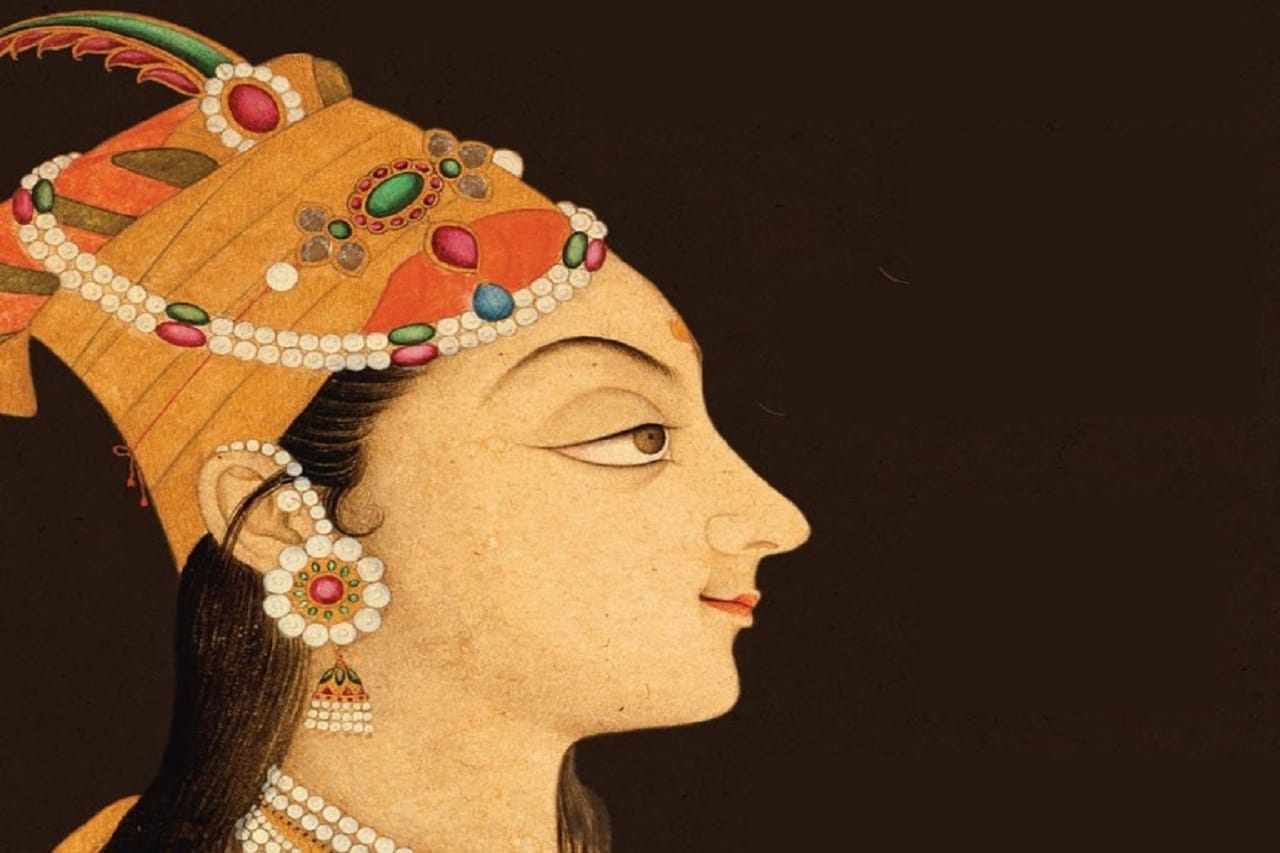 When you look back on the reign of the six principal Mughal emperors, based on historical records, this is how you’ll perceive them: Babur founded the grand empire on Indian soil, but the heat in this subcontinent made him regard ‘Hindustan’ as a foreign land; Humayun lost this newly-founded empire to Sher Shah Suri. He was driven out of India to find refuge in the lands of Shah of Persia, and returned to claim the Mughal empire in India; Akbar inherited the throne at the young age of thirteen, consolidated the empire, and enabled it to reach its zenith; Jahangir further added new kingdoms to its vast territory, and, the stories of his romantic affiliations are quite famously recalled; Shah Jahan constructed the Taj Mahal mausoleum, firmly establishing his name in history for posterity to remember; Aurangzeb, had a key role in the break-up of the empire, owing to his religious fanaticism.

However, in these descriptions, we often overlook the instrumental role various influential women played from ‘behind the veil’ and the innumerable power struggles, which involved decimating swathes of territory, brutally murdering blood-related brothers, and rebelling against one’s father for solely one purpose: to crown oneself as the Mughal Emperor. It is in this dimension that Indu Sundaresan’s Taj Mahal trilogy [constituting three books, namely, The Twentieth Wife, The Feast of Roses, and Shadow Princess] stands out. Keeping historical facts, juicy gossip, her vivid imagination, and her exceptional art of vicarious storytelling, as the premise, she builds a narrative which is women-centric and exalts the stature of Mehrunnisa, or Nur Jahan [Empress of Mughal India; and, Jahangir’s wife] and Princess Jahanara [Shah Jahan and Mumtaz Mahal’s daughter] in the debates and discussions concerning Mughal India.

MEHRUNNISA: THE SUN AMONG WOMEN

Mehrunnisa was a harbinger of great fortune for her family members who had been reduced to the status of mere refugees after being ousted from Persia. The day she was born, when the storm did not seem to abate, her father Ghias Beg met a benevolent merchant who introduced him to Akbar in a court session, and enabled him to become a Mughal nobleman. As a child, Mehrunnisa regularly visited Akbar’s imperial zenana and fostered a special bond with the ladies of the harem, especially Ruqayya Begum who was Akbar’s ‘Padshah Begum’ [‘First Lady’]. Her visits made her realise that ‘nowhere else in the empire did women have such freedom… the sheath of royalty gave the women of the imperial harem an emancipation a commoner could never hope to achieve.’

Ambitious and far-sighted as she was, she decided that she would marry Prince Salim [who was later given the title of ‘Jahangir’]. In fact, when Salim met her for the first time, she was only seventeen, and he was instantly captivated by her aura, frankness and advanced sense of reasoning. But, when he requested his father Akbar for her hand in marriage, he outrightly refused as Mehrunnisa had already been betrothed to Ali Quli [a Persian soldier serving in Akbar’s court] without her consent. Years passed languidly. Mehrunnisa gave birth to her only child Ladli after several miscarriages, and in the back of her mind, she continued to long for Jahangir’s affection. And, this hidden desire was soon fulfilled when her husband rebelled against the crown by murdering the Governor of Bengal, Qutubuddin Ali Koka. On the grounds of sedition, Ali Quli was killed by the men of the imperial army.

As a result, Mehrunnisa became a widow and moved back to the imperial zenana under Ruqayya Begum’s shelter who was now a ‘Dowager Empress:’ a status she had acquired after Akbar’s death. It was then, in a chance encounter, that Jahangir reunited with Mehrunnisa in the streets of Mina Bazaar and soon made her his twentieth and last wife, conferring on her the title of Nur Jahan [‘Light of the World’]. It was a marriage for love and not for forging political alliances. Mehrunnisa was thirty-four at that time [‘old by traditional marriage standards’] and also a widow [whose re-marriage was a contentious issue]. So, it was natural for her to be subjected to much ridicule. Yet, she was unfettered and clear in her resolve. She affirmed her position not only as a supportive wife, but also as an able advisor and clever administrator. Nur Jahan was often lambasted publicly for her repertoire of remarkable ‘governance-related’ manoeuvres as they represented the fact that a woman had ‘crossed the limits set by society.’ In fact, Mahabat Khan [Jahangir’s statesman whom Nur Jahan had tactically transferred to Bengal from the Mughal capital at Lahore] captured Jahangir and separated him from Nur Jahan for he was infuriated and rankled by her supremacy and competence as a ‘shadow ruler.’

It is important for us [history enthusiasts] to remember that Jahangir’s determination to involve her in critical political deliberations was not mere ‘tokenism,’ but rather an appreciation for her vast intellect, wisdom, and knowledge on multifarious subjects. It was her astuteness that enabled her to leave an indelible imprint on the fabric of diplomacy, which is aptly represented in the way she pitched the Britishers against the Portuguese. One could argue that the ‘Non-Aligned Movement’ pioneered by India’s first Prime Minister Jawaharlal Nehru in the 20th century, which is extant in today’s foreign policy architecture, was, in fact, inspired by Nur Jahan’s diplomatic stratagems.

The caustic criticisms against her power, abundantly found in historical texts, arise from the inability to position her on an equal level as a man in terms of cerebral prowess and sheer charisma. She is often described [in the said sources] as a ‘sorceress’ who performed ‘black magic’ to captivate Jahangir and ‘have him in her clutches.’

As readers, we need to actively acknowledge the patriarchal framework in which these historical accounts were written. Only then will we be able to debunk these documents and view the brilliance of Nur Jahan — the unconventional and powerful Empress — with a sensitive lens.

Princess Jahanara was by her mother Mumtaz Mahal’s side when she died, giving birth to her fourteenth child. Mumtaz Mahal was Shah Jahan’s confidant and had been a ‘source of solace’ to him during his arduous years in exile in the Deccan, while he was rebelling against his father, Jahangir. Although Mumtaz Mahal was docile and submissive, unlike her fiercely ‘dominating’ aunt Nur Jahan, she stood as a resolute pillar of support in the gruelling years of Shah Jahan’s life. Therefore, her death brought immense grief to Shah Jahan who subsequently observed strict mourning for two long years during which he aged immensely.

This untimely crisis impelled Jahanara, the eldest daughter who was barely seventeen years old at that time, to undertake immense responsibility. She ensconced herself as the ‘Padshah Begum’ in her father’s imperial zenana [a title conventionally reserved for the Emperor’s most influential wife] and deftly managed all matters concerning the harem. However, her authority in the zenana and over her father’s monarchical decisions came at a huge personal cost: she had to subdue her personal desire to be a ‘loving-wife’ to forever being a ‘doting-daughter.’

Jahanara stood firmly by her father’s side till his last breath as a ‘prisoner’ in the Agra fort. She dispassionately witnessed the blood-wars that her brothers waged against each other and how Aurangzeb’s excessive zeal and machinations worked in his favour. In spite of these tumultuous events, she sustained her resilience and strived to maintain social order in a state of dystopia.

If it were not for these women, among many others whose names have faded into oblivion with the passage of time, the Mughal Empire would have disintegrated before its time in history.