The recent unexpected and tragic demise of a celebrated Bollywood actor left the entire nation in shock and despair. This incident sparked a series of debates on the issue of mental health and depression.

“From desire comes sorrow,” is a Buddhist aphorism for looking at depression, attributed to materialistic attachments and also constant inability to attain certain aspirations set for oneself. But the transition from mere depression and disturbed feelings, which are common elements of possibly every human’s life, since our wants are never-ending, to suicidal thoughts and the desperate act of ending one’s life is something vastly different and no less than a morass marked with extreme obscurity to fathom. An attempt to better understand this intermediate phase and not find oneself in a perplexing situation wherein one has nothing else left in retrospection, but to say ‘I wish I could have helped or reached out… if only I had known before,’ impelled me to pick a modern classical novel, The Bell Jar, a semi-autobiographical novel based on the poetess Sylvia Plath’s life.

Plath’s novel vividly highlights the story of a young girl, Esther Greenwood, who was ‘supposed to be having the time of [her] life’ but instead finds herself being sucked into a whirlpool of depression and eventually attempting suicide, as she tries to deal with difficult relationships and a society that refuses to take women’s aspirations seriously. Although the novel portrays the 1950s American society, it is highly relevant to the present time. The pellucid grace of her prose and the implicit, profound meanings in the detailed descriptions aptly accentuate her gloomy state of mind and the ambivalence of conflicting emotions that Slyvia Plath herself was entrenched in before she committed suicide in 1963, at a young age of 30, at a time when her literary works were thriving.

Readers, young and old, have appreciated the novel for a variety of reasons, sometimes personal too, but the strength of the novel lies in the fact that it intrinsically broaches two significant taboos in our society: mental illness and male chauvinism. It is for this reason that this partial-autobiographical account has received mixed reviews over the years — either you absolutely love it, or terribly disturbed by it, but one thing is for sure. This novel will send shivers down your spine and will render you with a fresh lens to view the world and its associated problems. So, brace yourself if you have mustered the courage to read the novel till the last page [no exaggeration intended].

The protagonist and narrator of the novel is an angst-filled teenager who has always been at the top of her class but ‘after nineteen years of running after good marks and prizes and grants of one sort and another, [she] was letting up, slowing down, dropping clear out of the race.’ Everyone she knew would consider her to be a privileged and lucky girl for bagging a scholarship to college and for ‘steering New York like her own private car.’ But her perception of her own life is in stark contrast to what others believe.

There is a preponderance of strong negative emotions in her mind which always makes her feel inconsequential and worthless. In the novel, Esther expresses her state of mind; she says, “I feel very still and very empty, the way the eye of a tornado must feel, moving fully along in the middle of the surrounding hullabaloo… I felt myself melting into the shadows like the negative of a person I’d never seen before in my life… I felt myself shrinking to a small black dot against all those red and white rugs and that pine-paneling. I felt like a hole in the ground.”

Her feelings of self-hatred proliferate when she compares herself to accomplished people around her and feels dreadfully inadequate. While in a UN building, sitting in between Constantin, her interpreter, who could simultaneously play tennis, and a Russian girl, who knew an impressive number of idioms, she feels extremely morose. She says, “The one thing I was good at was winning scholarships and prizes, and that era was coming to an end. I felt like a racehorse in a world without racetracks, or a champion college footballer suddenly confronted by Wall Street and a business suit, his days of glory shrunk to a little gold cup on his mantel with a date engraved on it like the date on a tombstone.”

Creative by nature, Esther regards her life and her quandary while making the right choices quite similar to the process of selectively choosing figs from a large tree, about which she had read in a pastime story. She would imagine her life branching out before her like a green fig tree and ‘from the tip of every branch, like a fat purple fig, a wonderful future beckoned and winked.’ She could see herself sitting in the crotch of this fig tree, starving to death, just because she couldn’t make up her mind on which of the figs to choose. ‘[She] wanted each and every one of them, but choosing one meant losing all the rest, and, as [she] sat there, unable to decide, the figs began to wrinkle and go black, and, one by one they plopped to the ground at [her] feet.’ Her upbeat life diminishes more and more under the burden of her cynical and pessimistic attitude because she continually entertains these gloom-ridden thoughts and actively chooses to overlook the positive side to life. In this way, she allows herself to be engulfed by the Leviathan of negativity surrounding her. 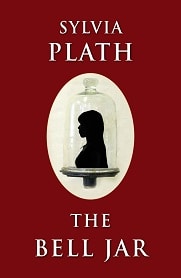 Esther is of the belief that if one expects nothing from somebody then one is never disappointed. This notion of hers is furthered when she is unable to make it to the writing course that she was always hoping to attend as it would have been a harbinger of change for her. In this context she remarks, “All through June the writing course had stretched before me like a bright, safe bridge over the dull golf of the summer. Now I saw it totter and dissolve, and a body in a white blouse and green skirt plummet into the gap.”

Her level of depression reaches a peak after this rejection and drags her into a severe state of sleep deprivation. In the novel, Esther describes her condition: “My mother told me I must have slept, it was impossible not to sleep in all that time, but if I slept, it was with my eyes wide open, for I had followed the green, luminous course of the second hand and the minute hand and the hour hand of the bedside clock through their circles and semi-circles, every night for seven nights, without missing a second, or a minute, or an hour.” After hearing about her state, the family doctor Teresa advises her to visit a psychiatrist.

She tries to lucidly explain her feelings and her restlessness to her psychiatrist, but she is reluctant to mention a strange incident which she had never experienced before. It occurred when she tried to write a letter to her friend Doreen in West Virginia. She explains it to readers: “When I took up my pen, my hand made big, jerky letters like those of a child, and the lines sloped down the page from left to right almost diagonally, as if they were loops of string lying on the paper, and someone had come along and blown them askew.”

A bright young student and a budding writer had lost the ability to form and write legible words. Weeks pass by but her condition shows no improvement, so the doctor prescribes her a shock treatment. She describes her first shock treatment analogous to this hypothetical situation: “Something leapt out of the lamp in a blue flash and shook me till me teeth rattled, and I tried to pull my hand off, but they were stuck, and I screamed, or a scream was torn from my throat, for I didn’t recognise it, but heard it soar and quaver in the air like a violently disembodied spirit.”

It may be difficult for some readers to grasp the increasing deterioration of her mental well-being and her multiple suicide attempts. Esther’s story tugs at the readers’ heartstrings and makes us more sensitive to people around us suffering from mental illnesses.

Plath’s personal experience of a disturbed marriage and her notions on the maltreatment of women post-marriage and their objectification are also highlighted as a part of the story’s narrative. Esther  is resolute that she would never marry because all the women she has seen around her in marital relations are gravely oppressed since gender inequality is an intrinsic feature of 1950s American society. She cites the example of her close friend Buddy Willard’s mother: “This seemed a dreary and wasted life for a girl with fifteen years of straight A’s, but I know that’s what marriage was like, because cook and clean and wash was just what [Buddy] Willard’s mother did from morning till night, and she was the wife of a university professor and had been a private school teacher herself… And I knew that in spite of all the roses and kisses and restaurant dinners a man showered on a woman before he married her, what he secretly wanted when the wedding service ended was for her to flatten out underneath his feet like Mrs Willard’s kitchen mat.” These incisive and strong expressions reflect how strongly Plath felt against patriarchy and misogyny, having been oppressed and restrained by this institution herself.

Fortunately, the situation may have considerably improved in the 21st century, but the underlying gender roles are as yet frequently promoted, since they have been historically ingrained in our society. Therefore, it becomes imperative for us to consciously recognise this and strive towards greater equity for both the genders.

SIGNIFICANCE OF ‘THE BELL JAR’

The Bell Jar signifies the state of being trapped and constantly enveloped by negativity. Esther explains: “To the person in the bell jar, blank and stopped as a dead baby, the world itself is the bad dream.” On the day of her liberation, the day when her doctor takes her outside in the fresh, blue-skied air, Esther finally opens herself to experience the minute, yet beautiful things around her that bring immense joy. She remarks, “All the heat and fear had purged itself. I felt surprisingly at peace. The bell jar hung, suspended, a few feet above my head, I was open to the circulating air.”

The novel, put simply, not only makes us more understanding and receptive, but it also provides us with a fitting fillip to embrace and appreciate beauty too around us.