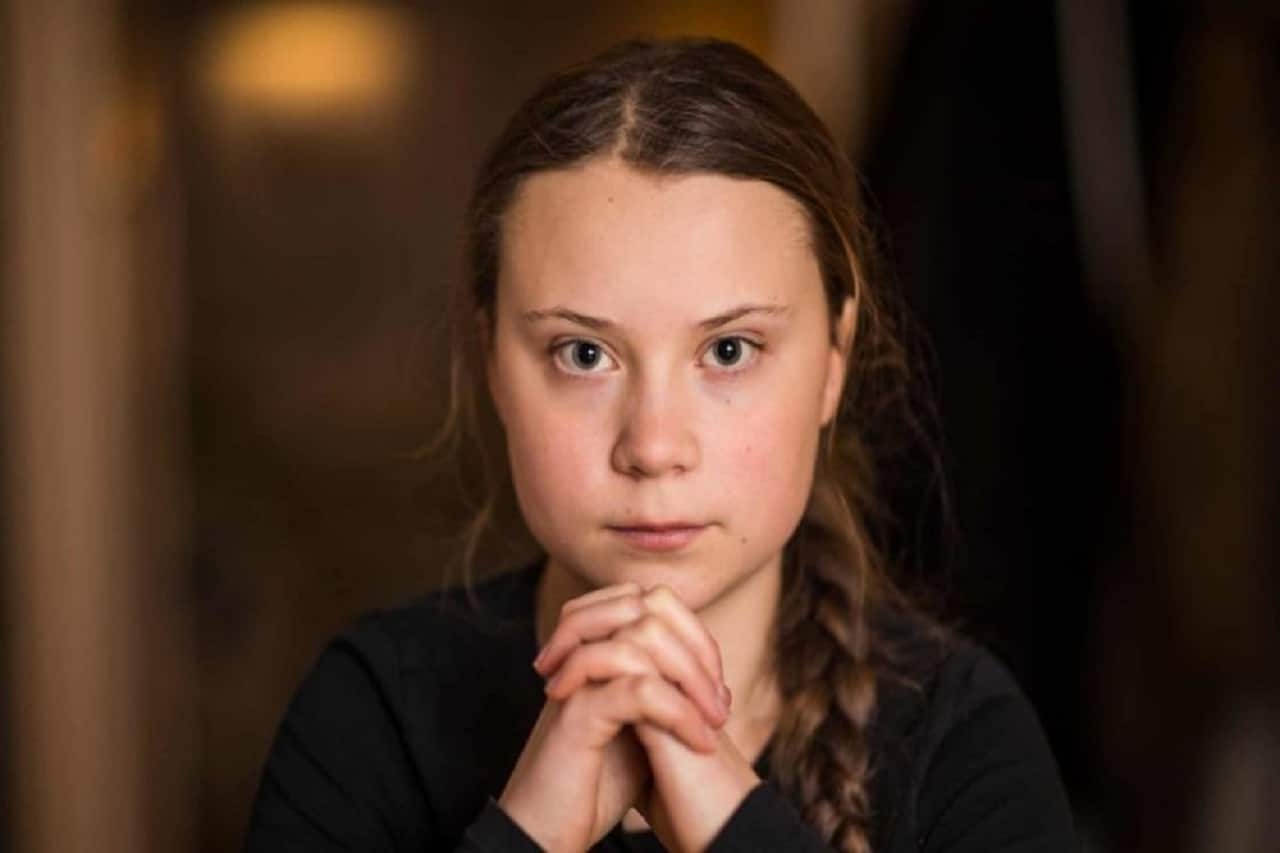 This is a ‘play’ on the title of one of Leo Tolstoy’s short stories. It continues to be true today. Well, parents must pause and listen to what their daughters have to say; teachers in the developing world — there is a decent degree of equality in the developed world — must learn to encourage girls as much as boys in class.

Pearls are created as defence mechanisms against a potentially threatening irritant such as a parasite inside the mollusc shell, or an external attack that mauls the mantle tissue. It is an immune response in the mollusc. The pearl may, thus, be looked upon as an ‘antibody’ analogous to what happens inside a human body.

When the Swedish couple Svante and Malena, named their daughter Greta, they would hardly have imagined that they were gifting a veritable pearl to the world. A pearl which would grow up to become a defence mechanism against several potent irritants to Mother Earth, the mollusc, in the 21st century — climate change being villain number one, alongwith its co-conspirators — consumerism, selfish narcissism and cut-throat capitalism, and, if I may add, something which emerged a few years ago — Trumpism.

Well, I must have written this first — Greta means pearl, and it is a name of German origin. And, like what pearls are metaphors for, this endearing girl is doubtlessly rare, valuable and admirable, deserving support not just from her parents and fellow-countrymen, but from one and all, who get to know what she is fighting for so doggedly like a little Capricorn she-goat [she’s born January 3] determined to scale craggy peaks, focused all the while on the goal she has so clearly defined for herself — the final goal of consistent do-goodery, a resolution on the part of societies, economies and governments to tackle climate change as Team Homo sapiens.

Like Covid-19, this is also a common enemy, and we cannot afford to let any self-goals, on the part of some haughty leaders which this century has thrown up, to add insult to injury and complicate the challenges we are all trying so hard to surmount. Readers may wish to read the books, No One Is Too Small to Make a Difference, Scenes from the Heart and I Know This to Be True. And, watch out for many more — this girl is prolific and if Rachel Carson’s Silent Spring, written in the 1960s, sparked off the environmental revolution in a way, dozens of books written by Greta Thunberg will serve to sustain it, and keep the flame burning.

There have been many girls in the past who have exploded onto the scene, and been the change they wanted to see in the world. We sadly may not know about all of them, though there may be accounts, articles, books and films for posterity, which anyone keen on researching further [on the topic], may avail of.

Just to randomly name a few who have become household names, the valiant canonised French girl – Joan of Arc, the silently-suffering Dutch Jewish diarist Anne Frank, and more recently, the suppressed-but-not-subdued Malala Yousufzai. And, now, the world has been introduced to Greta Thunberg from Stockholm. She has already become the change she wishes to see in the world. The recipient of a host of awards and recognitions, which I dare to assume here, she does not value, or prize, as much as the satisfaction she derives from people around her doing what is good for the environment, Greta sets an example, which youngsters — girls and, of course, boys too — around the world, must emulate. She is a pleasant antithesis to the ‘all bluster no deed,’ ‘all talk and no deed,’ we normally associate with celebrities, the word itself being often used derogatorily as a result.

The Hindi song from the Shah Rukh Khan movie — Chak De — comes to mind. Kuch kariye, kuch kariye, bas bada bada bole… [Get down to doing things, enough of all the talk…]. It is here that Greta’s selective mutism which is sadly considered to be an abnormality by psychologists, comes to the fore. Speak when you are spoken to, and only when necessary. This has actually been a weapon in her armoury, just like the Asperger’s syndrome, has become her ‘superpower.’

Verbosity and loquaciousness is simply white noise which drowns all that is actually important in an ocean of words and sentences. Hitting the nail on the head, hard and once, and repeatedly when and if needed… gets the maximum results. Of course, one may wonder how this would apply to someone like the current US President.

Well, as mentioned earlier, his ego is one of the irritants, a pearl like Greta and the army of young pearls she is silently building, is expected to counter and conquer and relegate to such sidelines in the near future. Her response to Don Trump’s tweet, not long ago, made many, laugh in admiration… a response which was too intelligent for the big man to understand.

She is good now, and en route to becoming great, the long and hard way, by piling on her achievements and leaving her ‘heart-prints’ all over, while trying to goad humanity to truncate its greenhouse gas foot-print.

Beethoven was deaf and blind. Helen Keller was deaf, blind and dumb. They never complained or cribbed about being short-changed by god. They have become immortal; they will always be remembered and will continue to inspire thousands in the decades to come, if not millions.

Greta’s Asperger’s is her superpower. Her brahmastra [name given to supernatural weapons in Sanskrit — which were supposed to have been used in the Mahabharata], if one may draw that closer to our country. I know exactly what she means, for I had it myself and now, perhaps, am enduring a milder version of it, as confirmed unofficially by a shrink I met in Norway. Friends would, however, wish to think otherwise, as I am trying to make an effort to fit into ‘normal’ society, though I do not know if I must be doing so. And besides, this ‘differently-abled’ nature of those who have different degrees of this syndrome is actually good for the world. Think of Newton, Cavendish and Einstein, and, perhaps, also da Vinci. Greta is in great company, nay illustrious company.

Hats off to her parents for having made small and big sacrifices en route to support their daughter, and to keep the light shining, and the lamp burning, on her desire to change the world. ‘New York is smelly and indescribable.’ ‘I do not understand why you guys here are still not sure whether to believe or not believe in climate change [when everything is so obvious]. Where I come from, we all agree that it is a fact and are now trying to take action to combat it.’ ‘We need to use our powers as citizens of democracies to get the governments we elect to do the right things.’ These are statements she made, poker-faced, with that occasional smile on her face — selective mutism at play at its very best — on Trevor Noah’s The Daily Show. Watch it, dear readers, just 9-minutes long. And, then think for a moment that’s she is only 17-years-old, carrying the weight of the world on her shoulders. Of course, they say this about Capricorns — old when young and the aging in reverse after they have shouldered enough for a long time.

Advice to parents reading this… there are diamonds and pearls everywhere and they just need to be unearthed with a little encouragement and support. Your kids can make you proud, if you are willing to go the extra mile and make some sacrifices for them. And, advice to youngsters out there — you may be short-changed, but do not let the external world make you believe this. Prove everyone wrong — remember the quote about a purported illness being a superpower. Watch Taare Zameen Par.

Greta boldly takes her petitions to powerful men and women around the world. The Pope listens to her with respect. These are people, you and I may feel nervous to meet and speak to. Now, this courage has its fount in the fact that she cares for Mother Earth more than anything, or anyone else — of course, she cares for the generations to come, but through the ‘good health’ of terra firma which she is dead sure indispensable for the well-being of her generation and those to follow. Greta is not a hypocrite, rest assured. She has shown without doubt that she believes that environmentalism begins at home.

Combatting climate change is largely ex-oikos. Using saam [gentle exhortation], daam [providing incentives], dand [penalising, levying fines] and bhed [discriminating and imposing sanctions], not literally though, she has coerced her parents to toe the line. She tells Skavlan in the eponymous Scandinavian TV talk show that she checks the receipts they get from their shopping sprees to find out if they have ‘over-shopped’ and succumbed to consumerism.

Greta has been nominated twice for the Nobel Peace Prize [2019 and 2020], and may, perhaps, win it this year, If you do not, Greta, you may be nominated again and again till one year, you will win it…and, then you will deserve it totally. There will be tears of joy shed in pride, by well-meaning, like-minded individuals around the world, and you can count this writer among them. If you get to read this, via possible forwards and forwards of forwards on social media, I would consider it an honour to be of assistance in whatever way possible, in this campaign, nay, crusade against climate change.