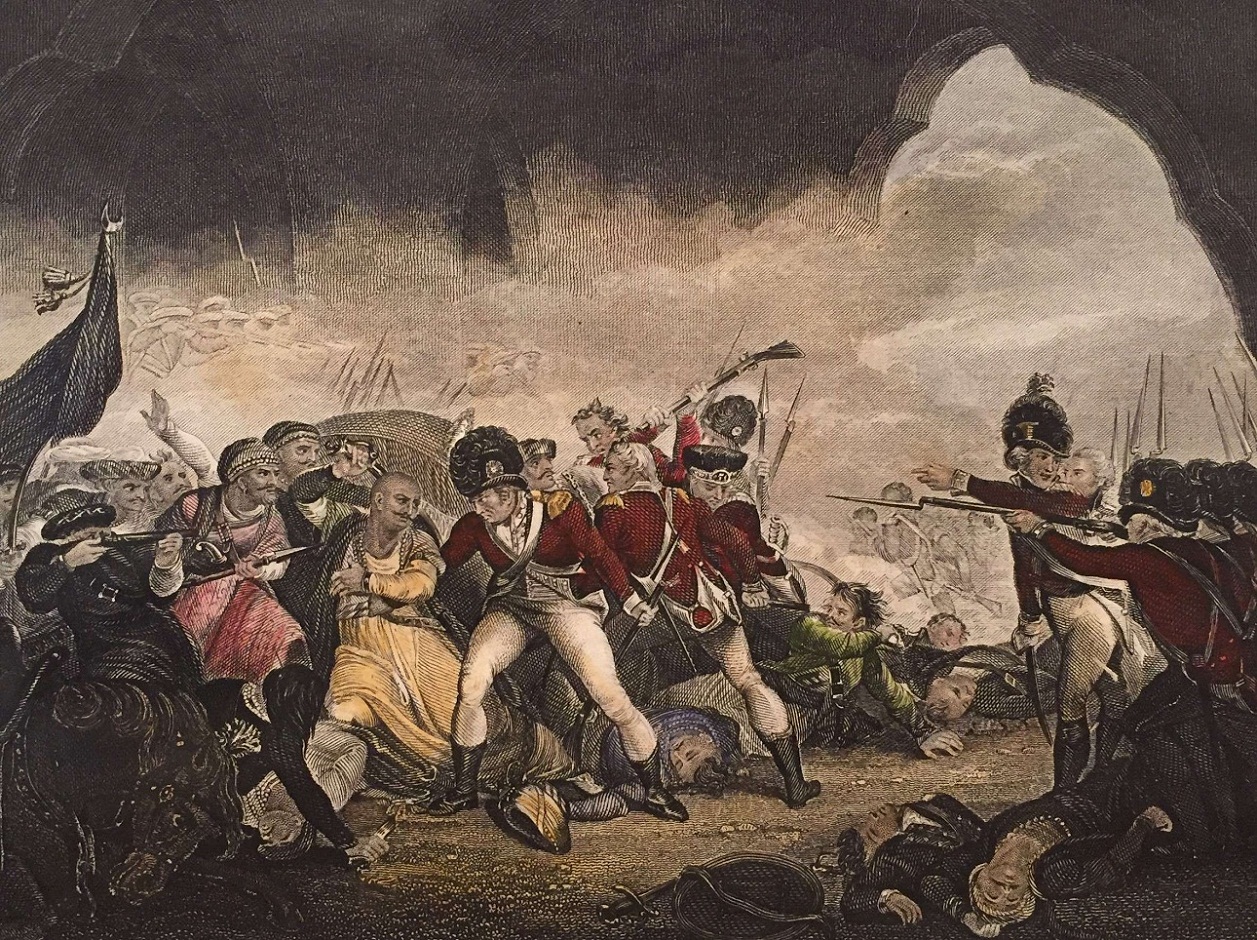 No Indian ruler has aroused as much admiration and hatred as Tipu Sultan, the ‘Tiger of Mysore.’ His is a mixed legacy: a paradox of contrasts and a piebald reflection of our changing times.

This piece does not take sides; it looks at the Tipu persona without sporting tinted glasses.

First, things first. It was Tipu Sultan’s exalted vow, to drive the British — the foreign infidels and usurpers as he called them — out of his kingdom and ultimately from India. When he died a hero’s death, the decks were cleared for the East India Company’s monopoly on what was to eventually become the Jewel in the English Crown. For, after the ‘Tiger of Mysore,’ there was no one really to stall the English juggernaut from rolling over and conquering India.

As Tipu’s final defeat was celebrated on the English stage, with spectacular melodrama, the portrait of the Mysore ruler as a monster-tyrant began to be perpetuated by triumphant military historians and analysts, thanks to their susceptibility to changing colours like no other — at the proverbial drop of a thought.

History is narrated by the triumphant, not the vanquished. Ironically, the fall of Tipu went beyond this accepted norm. Because, in their over-enthusiasm to pleasing their new bosses and adapting themselves to changing circumstances, it became a travesty for some of India’s own chroniclers to forget real history’s most singular objective — knowledge complemented by a keen sense of observation.

No Indian ruler has aroused as much admiration as well as abhorrence as Tipu [November 20, 1750-May 4, 1799], after the heydays of Vijayanagar’s brilliant sovereign, Krishnadevaraya, who had reigned almost two centuries earlier. Interestingly, it is only now that the life of Tipu is being reassessed primarily on account of his holding a profound place in public imagination. He has been as much reviled as his prospective French collaborator Napoleon Bonaparte, although the French emperor, unlike Tipu, surrendered and died in British captivity.

Yet, it goes without saying that gross favour and prejudice, something that hasn’t so much bogged down the Napoleonic aura, continues to persist vis-à-vis Tipu’s true identity. Blame it on a host of factors — Tipu’s ambivalent brutality, the changing contextuality of the Indian psyche and situation, glorification, religious vagaries, or brusque disdain, and not prudent handling of his ‘out of the ordinary’ persona, in print and the visual medium.

The predominant bone of contention is: Tipu was vicious and ruthless. That he often forced his British prisoners to undergo circumcision, as much as he coerced the Hindus of Malabar, and Coorg, to change their faith. It doesn’t need a Sigmund Freud to get to the crux of the matter. Maybe, the situational element could have possibly triggered such a response in Tipu, who was too obsessed to a fault, also tyranny, even though he was a master of his circumstance.

No one can justify, or defend his excesses. Yet, was it not a paradox that it was often Tipu who came to the aid of Hindu temples, whenever they were plundered or threatened by lack of funds, dilapidated or faced extinction? For an ardent devotee of his capital’s presiding deity, Sri Sriranganatha, Tipu renovated the famed temples of the Sankara faith, at a whopping cost, after the Marathas had ransacked and plundered the pristine, sylvan town of Sringeri. This was not all. When one of his prayers was answered, Tipu installed a Shivalinga at Nanjangud’s famed Srikanteshwara Temple, near Mysore. The list isn’t comprehensive, only fragmentary evidence.

Paradoxically, like most rulers, Tipu was often devoid of niceties. More so, when it came to acts of disloyalty. No small reason why he sought vengeance on Kanara Christians, who had supported the British and worked for his downfall. Yes, Mangalore was a part of Tipu’s domain and there’s a fort, now in ruins, which belonged to him, at Barkur, near the renowned temple-town of Udupi.

Yet, as a protector, Tipu was kind and tolerant like the great Mughal emperor Akbar. So much so, Hindus, like Purnaiya, Tipu’s legendary prime minister, not only held positions of distinction, but also served as his trusted ambassadors. However, when it came to betrayal of trust, Hindus or Muslims made no difference to Tipu. It’s needless to highlight that Tipu’s own relative and cabinet member Mir Sadik betrayed the ruler of Mysore in the end.

At the other end of the spectrum, Tipu had varied interests, unlike most of his self-promoting, illustrious Indian and foreign contemporaries. He knew the Vedas and the Quran. He was cognisant of the import of both the ecology and environment: a man far ahead of his time. He was interested in commerce and agriculture. He introduced pineapples from Africa and avocados from Mexico and cultivated the piper betel creeper. He once wrote, “Clove and nutmeg seeds and plants must be brought back from Mauritius.” Tipu’s own garden was full of fruits and vegetables, including strawberries. He was also aware of the enormous value of spices: both in terms of cuisine and economics. His fall tells it all. Never again through the years of the British Raj would Britain lose its grip on India’s spice trade.

Tipu loved plants and trees. He planted hundreds of saplings with his own hands. He was equally fond of the arts and the latest developments in warfare. The first and the foremost Indian ruler of his time to have realised the immense value of a strong navy, Tipu was the first-ever general to have used crude — the most advanced of his time — if not cruise missiles. He called them rockets. Tipu’s rockets used iron castings — for holding gunpowder, the propellant. They possessed a great thrust and long range — up to 2-3 km. Tipu deployed his rockets in the Battle of Pollilur, in 1780. He was able to knock the stuffing out of the British army with stunning effect.

So, there it is. Not only was Tipu a technology buff, he was also an avid collector of western gadgets, most notably the barometer. He also did the obvious: promote the manufacture of novel devices within his kingdom. What’s more, Tipu was a great admirer of the US Constitution. He was significantly inspired by the draft. He corresponded with the first scientific American, Benjamin Franklin, one of its founding architects. It also fuelled his dreams of a united, self-reliant and strong India, with equality of status and opportunity.

Tipu also gave a new direction and thrust to the silk [and, sandalwood] industry, which is now Karnataka’s pride. He dabbled in engineering skills too. Yet, he was awfully superstitious. Take for instance, the contents of his library, his books on theology, lexicography, astrology, jurisprudence, poetry and records of his own dreams collected between 1785 and 1798. Tipu also owned a mathematical box of English origin; he even cut English garments for himself. He hated British incursions on Indian soil, yes; but, he also respected London’s tenacity and progress. Tipu’s thinking, therefore, wasn’t polemical as most of his critics assert; it reflected his political sagacity.

For sure Tipu had his warts and moles. He once got for himself a life-sized wooden model of a tiger ‘consuming’ a British soldier, with mechanised French pipes concealed in the beast and its victim, which when wound up emitted the most life-like growls from the main actors — with the soldier’s arm jerking up and down trying to keep the ferocious animal away from his throat. What had actually inspired Tipu to think of the automaton was the reported death of a Scottish soldier, the son of General Hector Munroe, at the hands of a Bengal tiger. The general had defeated both Hyder Ali, Tipu’s father, and son in a battle. It was vicarious fulfilment and Tipu’s sense of caustic mirth.

Tipu had a fancy for tigers. He even adopted the stylized tiger-stripes as his personal motif. He also had a penchant for minting coins with Hindu, but most notably Muslim, themes. His palaces gloried in elegantly cusped arches, airy porticoes, balconies and alcoves, furnished with ivory doorposts, Persian carpets, china and glassware, optical and telescopic instruments. Analysts believe that the British “looted goods worth nearly UK£3 million from the palaces alone,” following Tipu’s final defeat.

As many as four wars were fought between Mysore and the British armies. But, it was the capture of Tipu’s great fortress-city of Srirangapatna in the third Mysore war of 1792 that seemed to have caused a deep psychological impact on Tipu — one from which he never recovered. Forced to surrender half his territory and his fierce pride shattered by the handing over of his two sons as hostages, Tipu never forgot the humiliation. He increased his faith to play-off the French against the British. While he hoped for French support in his own battles, all that Tipu received were mementos and trinkets.

It was, indeed, the discovery of correspondence between Tipu and Napoleon that angered the British and precipitated the fourth and last Mysore war. Surrounded by British territory, with the Nizam and the Marathas playing truant, Tipu stood alone. The passes through which he, and his equally daring father, had roared down to devastate the Carnatic were now effectively shut to him. Caged like a wild tiger, Tipu’s hatred for the English only became intense. When just a handful of French troops landed on the Malabar, Lord Wellesley got a pretext to strike at Tipu. More so, because the British were determined not to allow an ‘independent state’ to exist. Tipu wouldn’t settle for anything less. A double attack was launched on Tipu’s capital from Madras and Bombay. Tipu refused to explain for the presence of French soldiers and acquiesce to the further demand of half of his territory, with several other ignoble reparations. He replied bravely, “It’s better to live a day as a tiger than a lifetime as a sheep.”

After a prolonged siege, the British directed a swift assault on Srirangapatna, on the morning of May 4, 1799. Tipu was far from finished. Mounting a horse, he pushed himself into the thick of the battle with a handful of his most loyal soldiers. When the palace fell, there was no sign of Tipu, the commander-in-chief of the Mysore army. It was only after some time his body was found under a great pile of the dead and the wounded. Noted an eyewitness, “His [Tipu’s] features were in no way distorted and presented an aspect of stern composure.” Wellesley refused to believe Tipu was dead. Such was the fear and awe that Tipu’s bravery, as well as tactical, political and military finesse had instilled in the British, even when he lay vanquished and lifeless. A hero was dead. The British were relieved. Yet, true to their tradition of reverence for the brave, Tipu was given a fitting burial with full military honours.

Tipu was a progressive ruler within his own kingdom, albeit erratic, unforgiving, and eccentric elsewhere. At the zenith of his glory, he strode over his territory in majestic style, like a colossus. Mahatma Gandhi called him “a tolerant ruler.” An unbiased foreign observer described him as, “One who governed Mysore for nearly 20 years with brilliant talent and profound wisdom.” Writes Percival Spear in A History of India [Vol 2; Penguin]: “The destruction of Tipu provided a release for British energies. It removed a bogey… Now, the rest of India lay before them, a scene of division, decay and ineptitude.”