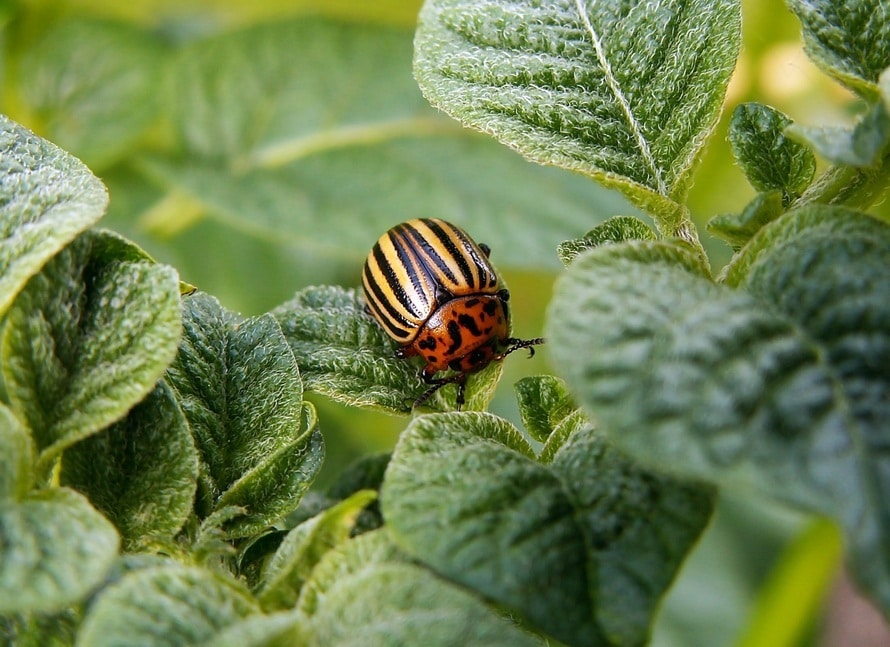 It was a bright spring morning and Betty, the beetle, was wide awake.

She knew she wasn’t supposed to go outside alone. It was such a lovely day, so what could possibly go wrong? Poking her nose up through the soft, dark Earth she wiggled her antennae. The air smelled warm and welcoming. Up she went, out of the hole.

High above her was a spider’s web draped between the leaves of a plant. The web was sparkling with dew. Betty was so busy looking at the shiny drops, she didn’t notice the kitten. The kitten crept towards her. He was about to pounce when Betty saw him. She scurried away, straight up the stem of the plant. Up, up, up, she went, away from those sharp, pointy claws. The kitten padded sadly away. He’d only wanted to play.

Half-way up the plant Betty tried to go back down — but, oh, dear, she couldn’t move. She was stuck in the web. As she squirmed in the fine, sticky threads the web started to bounce and shake, telling the spider that something was caught. “Oh, no,” thought Betty, as a big brown shape came hurrying towards her. She was going to end up — a spider’s breakfast!

Just in time Betty tore herself free and ran right to the top of the plant. The disappointed spider went back to her hiding place to wait for another unwary insect to come along.

Up on the top leaf, Betty sat shaking with fear. Another narrow escape — she would have to be more careful. At the bottom of the garden she could see someone digging. Push, lift. Push, lift. She wondered what he was digging for. Perhaps, he was looking for potatoes, or some lovely orange carrots.

She was so busy watching that she didn’t spot the bird high above her. Just like the spider, he was searching for some breakfast, too. A beetle would be perfect. Down he swooped, coming straight for her. He opened his beak wide and…

Suddenly, Betty felt the rush of air across her back. She scuttled away, right to the tip of the leaf. The bird swooped on past but Betty couldn’t stop. Over the edge she went, tumbling onto the path. She landed upside down on the ground, where she lay waving her tiny legs in the air. She was tired after so much running. She couldn’t turn herself over. Soon, she stopped struggling and lay still.

After a moment everything grew dark. A huge shape was looming over her. Had the kitten come back to get her? Was it the spider still looking for a meal? Or, had the bird returned? Betty closed her eyes, too frightened to look. But, instead of being gobbled up, she was flipped over onto her tummy. She looked up to see the gardener’s friendly face smiling down at her.

Betty scuttled down into the warm, dark earth. That was excitement enough for one day, she decided. She was going home to Mom and Dad back, where it was safe.

It was the twins’ first day at playschool and Luke was really excited about it. But, his sister Kerry wasn’t so sure. What happened at playschool anyway? They were met at the door by Miss Moss, a large, jolly lady with long, dark hair done up in a plait and shiny black shoes that squeaked as she walked.

“Welcome, children,” she said, “I’m sure you’re going to have a lovely time here at Parkview Playschool. As you can see there are lots of things to play with and lots of children to make friends with.” In a flash Luke was off to play with the toys, but Kerry stayed close to Mum.

“Watch out for the other children, Luke,” called Mum anxiously, as he clambered onto a tricycle and went zooming off towards a log cabin playhouse in the corner. “Screech,” went Luke, stopping just inches from the door. “Don’t worry,” Miss Moss said, “it’s just excitement, I’m sure he’ll soon settle down. And, Kerry will help me look after him, won’t you Kerry?”

Kerry nodded. Luke was always getting into scrapes. After Mum had gone, Miss Moss took the twins over to the painting table. Two other children were already there, painting lovely bright pictures in red, blue and green. Grabbing a brush, Luke squished it up and down in the paint pot. The bright red paint splashed everywhere and Luke giggled. The other children looked as if they had measles.

“Oh, dear,” sighed Miss Moss, going rather red herself, “I think we’d better find something else for you to do, hadn’t we, Luke?” But Luke was already heading for the climbing frame. In the blink of an eye he was at the top, swinging from the bars like a monkey.

“Goodness me, what an adventurous boy you are, Luke,’ said Miss Moss, hurrying to help him down. “Let’s try and find you something a bit safer to play with, shall we?” She led him over to a large white-painted box. Inside was the biggest collection of wooden building blocks Luke had ever seen. There were hundreds of them, of every colour and shape imaginable — blue and orange squares, green and yellow rectangles, red and purple pyramids. Soon, Luke was busy building the biggest tower in the whole wide world.

Over on the painting table, Kerry was painting a picture of a blue and white kitten. She’d never seen a blue kitten, but she was going to give the picture to Luke to put on his bedroom wall and the wallpaper in his room had blue and white stripes. There, finished. She looked up, wanting to show Luke his picture. But, he was nowhere to be seen. Not on the tricycle. Not on the frame. Not in the playhouse. Then she saw him… He was standing on top of the tallest stack of building blocks she’d ever seen. And, it was beginning to wobble.

“Look out, Luke!” she called. Hearing Kerry calling to him, Luke grinned and waved. Then the grin faded. Beneath his feet the tower was starting to feel all wobbly. “H-e-l-p,” he cried, as it began to sway. “Whoooa.” His arms were waving like windmills as the blocks at the edges started falling to the floor. Leaping up, Kerry rushed to her brother’s rescue. Grabbing a chair, she set it down beside him and scrambled on to the seat.

“Jump!” she shouted, holding out her hands towards him. Looking awfully scared, Luke grabbed her hands and jumped. Crash went the tower, scattering rainbow-coloured blocks all across the floor. “Cool,” grinned Luke, looking back at the empty space where he’d been standing a moment ago. Just then, Miss Moss arrived, her shiny black shoes squeaking like frightened mice.

“Oh, Kerry, what a clever girl you are,” she said breathlessly. “Thank goodness at least one of you is sensible. You could have hurt yourself, Luke, and then what would Mummy have said? Now then, I think, perhaps, we’d better do something nice and quiet until she gets back, don’t you? Like making salt-dough animals, perhaps?”

But the twins weren’t listening. They were too busy racing one another to the top of the climbing frame. Playschool, Kerry decided, was going to be fun.