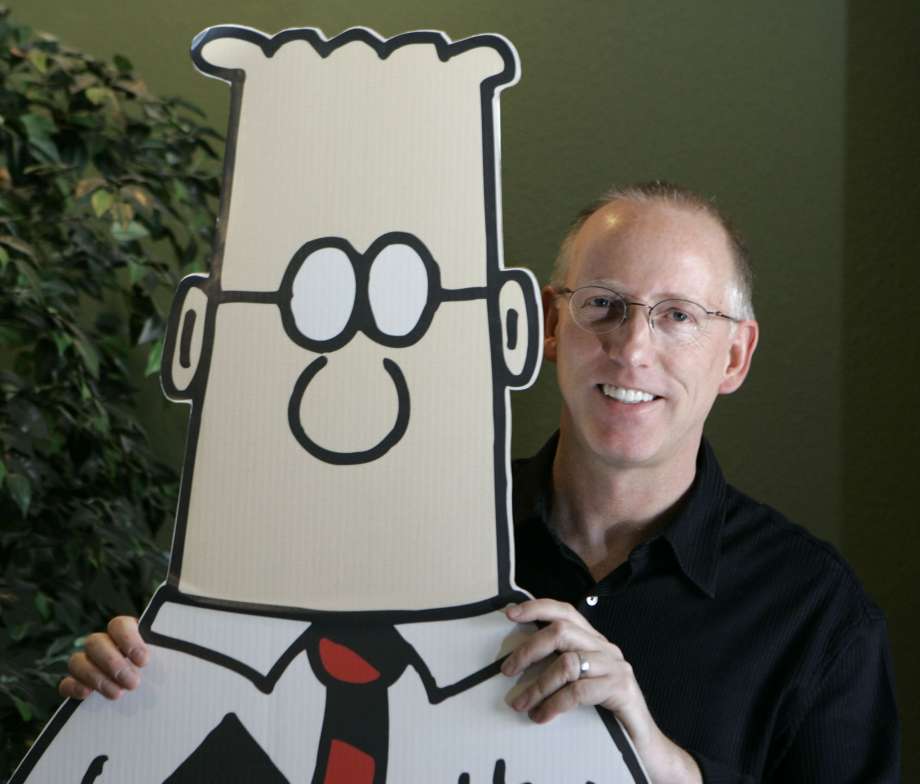 Nostradamus, or Nostramadus, step aside. Your time’s up. The creator of Dilbert — the comic strip that appears in over 1,500 newspapers worldwide — Scott Adams is the new seer, albeit he’s as controversial as they come… not to bow down, come what may.

First things, first. In The Dilbert Future, Scott Adams dons his remarkable soothsayer’s robes and turns his piercing eyes, and intellect — not to speak of his trenchant, undulating wit — to subjects as diverse as technology, the workplace, politics, elections, the battle of the sexes, drive-through pet care, and the possibility, nay eventuality of intelligent — or, stupid — life on other planets.

Result? Adams’ fascinating tome cusps through all the global hype and hoopla, or call it what you may, to stretch our thoughts and practices beyond the edge of conventional thinking. It also unravels a mind-boggling mix of farce and facts, and vice versa, while wobbling our social precepts and percepts like the fizz in a soda water bottle, leaving us gasping for breath — in awe, caustic mirth, and toxical wonder.

Adams’ imagination is electric. Apt. Valid. Funny. His psyche is acute. He uses metaphors, all right, but he tells a dynamic story: of what-is-what-as-it-is. What’s more, Adams’ voice for the future is bold, compelling, even schizophrenic vis-à-vis the shape of things to come: of how a futuristic society would evolve.

He says that human nature won’t change much. Because, we will all continue to be guided by immutable principles of stupidity, selfishness, and horniness, not to speak of snobbery, with better and better technological prowess. That’s the good news. Yet, the bad news will remain, more or less, the same: competitors will just become as clueless as you are, and more and more skilled professionals will flee from their corporate jobs and become their own bosses.

They will become entrepreneurs, consultants, cartoonists, and so on. Not only that. They will make merry because they will find more and more customers who are gullible enough to buy anything — no matter how worthless or stupid it is. In good, old times, it’s Persepolis. Now, it would be Confusopolis — a conglomerate of companies without barriers to market entry. Great. Yet, Adams does not trumpet that his vision is original. However, his idea is original, like all good authors and cartoonists. And, he is no exception to that  commonplace rule too.

Adams’ futurescape is daringly brilliant. It not only reveals his keen grasp of human nature but also sociology, and social dynamics. With his predictions, he even rules out the possibility of unpleasant surprises in the new millennium. Take his Prediction 1, for example: “In the future, authors will take a long time to get to the point. That way the book looks thicker.” Or, take his Prediction 3: “On an average, ‘Induhviduals’ who are alive today will experience 80 years of complaint-free living. Unfortunately, they’ll live to 160.”

The word, Induhviduals, is a devious variant. It means someone who is not a Dilbert reader, bright and attractive; but someone who’s an idiot. One can’t refer to “them” as idiots. Because, Dilbert readers are outnumbered? Yes, perhaps, and the idea has its own advantage. You can insult someone, says Adams — who’s as controversial as they come — without the risk of physical harm. So, he suggests a triad of good strategies for thriving in a future… full of Induhviduals:

Adams also conjures up visions of genetically engineered children, and how smart people can get rid of someone who has an incurable illness by cryogenic freezing. “You can,” he notes, “freeze their bodies and then thaw them out… when scientists have invented a cure.”

Well, the big point is, Adams is totally committed to the credo of acceptable brainwashing and additional brainwashing. He contends, “There’s no such thing as being TOO cynical.” Because, life in the future, as he puts it, will not be like Star Trek. Far from it. He is also convinced that there will be any number of high-tech gadgets that will goof off, and yet play a major part in everyone’s life.

Adams’ insightful look into life on other planets, democracy, gender relations, work, marketing, society, endangered species etc., in the 21st century, and why some things don’t work — like airlines, bicycle seats — including a new view of the future, affirmations, cause and effect, all make delightful, rip-roaring reading.

His merry work is also replete with his famed cartoon strips throughout. Also, the power they lend to his brilliant textual excursions is enormous: a real treat to the eye and the mind alike. Add to this, Adams’ breezy repertoire, repertory, reservoir, or marvellous splash of hundreds of other mind-blowing ideas, and you’ve a rollicking ride — a ride two-hundred times more memorable than anything Mumbai’s EsselWorld could offer — a real tonic for the mind and soul.

It’s a joyride of a lifetime, doubtless; a discovery of one’s self, and the future. It’s simple. It’s complex. It’s something beyond the realms of stupidity for our century.

← Beyond Virtual Reality The Web Of Serenity →